CQE currently comprises 387 members, including 178 integrated researchers with PhD (IDIs). Such numbers require CQE to be structured around several research groups. Therefore, the 178 IDIs of CQE have been assigned to eleven research groups.

Each group is coordinated by a principal investigator (PI) and, since some groups have members originating from both IST and FCUL, a co-PI is also appointed if deemed necessary. It is also advisable that a young IDI (a junior or post-doc investigator) is assigned to shadow the PI, in order to generate fruitful inputs across the experience/age gap. Designation of young researchers to shadow PIs at different levels will develop their project management skills by highlighting the importance of judiciously using financial and human resources. These skills are considered very important in view of future employment. Young researchers will be more enthusiastically engaged in the CQE project by gaining recognition for their contribution, and awareness that their views matter and can effect change.

The eleven groups are quite diverse in the number of IDIs (ranging from 8 to 27) and reflect the scientific interests of their members, their capacity to share resources and their will to be managed by a common structure. Thus, the organization of CQE can be understood as a strongly bound network of eleven groups, supported by the principle that such cooperative structure is both robust and easily adaptable to new challenges. In this setting, each group has the freedom to pursue its own scientific endeavors and achieve the highest possible recognition in its field of expertise. Nonetheless, every time an interdisciplinary challenge is faced by CQE, the network can quickly respond and the groups with the necessary expertise are called upon to address the problem. Moreover, it is noteworthy that the internal structure of each group is also quite diverse and versatile, from groups with a more hierarchical structure to others that can be seen as a set of independent sub-groups or individuals under a common scientific umbrella.

Another aspect of the organization of CQE is the allocation of its scientific interests into four different thematic lines (TLs). All TLs are closely aligned with the CQE mission, namely the production of high-quality scientific research to solve important societal challenges that impact our era.

The division of CQE in eleven research groups and four TLs is an integrated and flexible concept: i) groups are encouraged to produce scientific work and contribute within the context of multiple TLs; ii) thematic lines are not compartmentalized: instead, they overlap in different research areas (e.g. a novel nano-structured material (MATSoft TL) can have its most important applications in energy harvesting (SUSChem TL); iii) inter-group collaboration is expected to solve a specific challenge posed by a given TL from different perspectives.

Each TL will be managed by a PI. Their mission is to secure the engagement of different groups in research problems relevant to the TL, to promote activities (conferences, workshops, inter-group seminars) that reflect the scope of the TL, to organize teams of investigators from different groups that can tackle a novel problem, and (in close collaboration with the Science Managers of CQE) identify possible funding sources that are pertinent to the TL and that can be secured via the submission of proposals involving members from various groups. A closely monitored results-oriented budget will be assigned to each TL to fulfill such objectives.

The number of members and the strengthening of CQE at two sites (IST, FCUL), entails some modifications in the governance of the R&D unit. The present bylaws of CQE define the following governance structures:

The Scientific Council (SC) is composed by all members of the unit holding a PhD that are not integrated in other R&D units. The council convenes at least once a year and decides on strategic matters and other issues concerning CQE as a whole, including any modification of its bylaws. It elects the CQE Coordinator by secret-ballot and ratifies the nomination of candidates to all other governance structures.

The CQE Coordinator (CO), currently Prof. José Nuno Canongia Lopes, assumes the direction and management of CQE. The coordinator is elected every two years and represents CQE before other institutions.

The Executive Committee (CE) co-assists the management duties of the CO. Issues such as the efficient management of CQE at the IST and FCUL sites, the definition of task-specific executives in areas such as outreach and science management, or an age- and gender-balanced representation of all members of CQE, play a crucial role in the formation of an effective CE. For the 2020-2021 biennium, CE members are Prof. Canongia Lopes, Prof. Matilde Marques and Prof. Manuel Minas da Piedade, as vice-coordinators, and Marta Alves and Andreia Valente.

The Coordination Committee (CC) is the true link between the CO/CE and the groups/TLs. It is composed by the CO/CE members and the (group/TL) PIs. The CC convenes on a monthly basis to monitor, discuss and analyze different scientific and common-interest issues. It also advises on and approves the policies to be implemented by the CO/CE. The CC is composed by the CE members, the TL coordinators, and the group coordinators. The current TL coordinators are Prof. Luisa Martins (SYNCat), Prof. Fátima Montemor (MATSoft), Prof. Isabel Marrucho (SUSChem) and Prof. Matilde Marques (MEDLife). Group Coordinators are presented below. 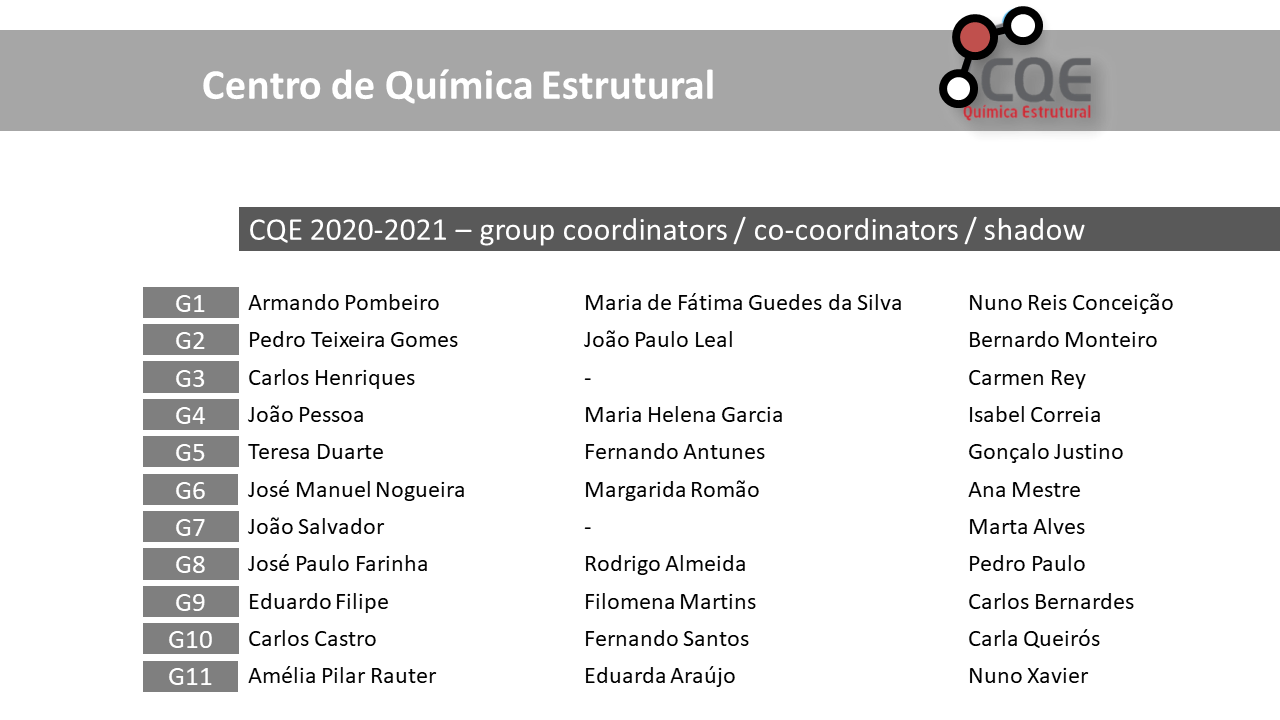