On July 1, 2020, before a virtual audience (a consequence of these pandemic times…), took place the academic jubilee of Professor Amélia Pilar Rauter, full Professor of Organic Chemistry at Faculdade de Ciências da Universidade de Lisboa (FCUL), where her career was acclaimed by the voice of those who have worked closely with her.

Professor Amélia Rauter graduated in Chemical Engineering at Instituto Superior Técnico, in 1974, and received her PhD from the Technical University of Graz (Austria) in 1982, where she taught as an Assistant Professor until 1983. In 1984 she started her carrier as Assistant Professor, at FCUL, where she ascended to the position of Associate Professor in 2003, one year after obtaining the title of Aggregate in Chemistry by Universidade de Lisboa and, in 2018, she became Full Professor.

Since the PhD, her main scientific interests have been in the area of Carbohydrate Chemistry. In this field, she has published around 200 papers in international journals, 12 patents and several books and book chapters. She edited also several publications and has coordinated or participated in numerous national and international projects sponsored by the EU, IUPAC, NATO, FCT, QREN, etc.

The recognition of her research work, with national and international projection, was reflected in the appreciation that academics from several universities have shown for her career, in the numerous invitations to participate in international conferences and seminars, in the attribution of merit scientific awards and in her choice for positions in renowned international organizations. Among the various organizations where she held positions, the IUPAC Division of Organic and Biomolecular Chemistry, the IUPAC Chemical Nomenclature and Structural Representation Committee and the European Carbohydrate Organization, of which he is currently the president-elected, stand out.

Professor Amélia Rauter has taught numerous graduate and postgraduate courses in Organic Chemistry, created the Euromaster in Chemistry, Health and Nutrition and participated in several school governance bodies. She had a prominent role in advanced teaching, completing with success the supervision of twenty-five PhD theses and numerous MSc and undergraduate theses. Her “mark” was, perhaps, most strongly imprinted in the teaching area. During the jubilee ceremony, the testimonies of former PhD students, belonging to several generations, and who have now jobs at the academy, industry or other areas, highlighted Professor’s Amélia Rauter enthusiasm, resilience, commitment and high standards to achieve her goals, as outstanding qualities, that guide their own professional paths.

Professor Amélia Rauter deserves, therefore, congratulations for a successful career, which shaped new generations of chemists, and which contributed to put Portugal on the international scene of Carbohydrate Chemistry. We wish her all the best for the future! 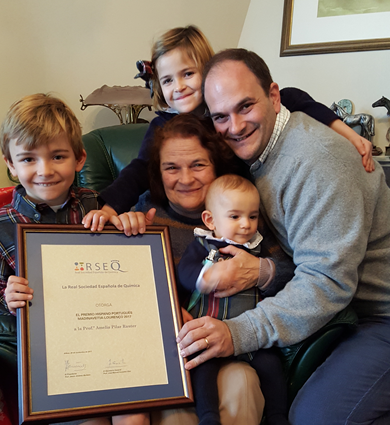